Christopher: Why Is Media Pretending That Dick and Mary Cheney Aren’t Also Horrible?

Christopher: Why Is Media Pretending That Dick and Mary Cheney Aren’t Also Horrible? 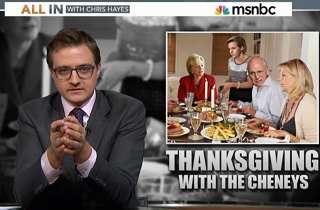 Along with “Why is it news that Liz Cheney is horrible,” this is the question that begs an answer as we enter day two of the media’s ridiculous coverage of a family dispute among horrible people. In her lost-cause bid to win a U.S. Senate seat in Wyoming, Liz Cheney told Fox News’ Chris Wallace that she believes in the “traditional definition of marriage,” and Mary Cheney bravely took to Facebook to snipe about it, while former Vice President Dick Cheney put his foot down and told Mary and her wife to pipe down.

For two days now, the media has been covering this as though Liz Cheney is a horrible villain, Mary Cheney is the wounded victim, and Dick Cheney is the guy who has always just wanted everybody to get along. Even liberal thought-leader Chris Hayes focused on Liz Cheney’s horribleness at “selling out her own flesh and blood on national TV,” and praised Dick Cheney’s “integrity” on the issue of marriage equality. While the liberal impulse to take shots at the only Cheney who’s currently in political play is understandable, this narrative, adopted by the mainstream media as well, is an insult to anyone who cares at all about marriage equality, and the broader issue of gay rights. Of all the contemptible Cheneys in this drama, Liz Cheney is deserving of the least contempt.

To be clear, Liz Cheney deserves lots of contempt, as does anyone who refuses to recognize the rights of others, but her personal belief in “traditional marriage” just makes her obnoxious, and assuming that belief is sincere, even carries with it a perverse courage of conviction. However, her political position, that the issue ought to be left to the states, is identical to the stated position of her father. That position is also wrong and cotemptible (even when it was held by our current president), but for purposes of this comparison, it puts Liz Cheney in a tie with the rest of her family.

What’s important to note here is what these various players did with that position. For all of his needle-threading, evolving, and/or triangulation on the issue of marriage equality, President Obama has always acted in favor of expanding gay rights, and as president, has a history-making record to show for it. When he was still wedded to the horrible “states rights” argument, he was consistently clear that states ought not ban gay marriage. Argue among yourselves if this qualifies as a profile in courage, but he has gotten results.

Dick Cheney, with Mary Cheney as his political adviser, paid lip-service to leaving equality up to the states, admittedly when that position was not a politically palatable one even for Democrats. He’s been getting undeserved credit for that move for years, but the alternative facing him was to crap on his own child. What Cheney and his daughter did with that political position was to wage an unprecedented political attack on the rights of gay people who weren’t Cheneys. The media is reporting on George W. Bush’s support, in 2004, for a federal marriage amendment, and Cheney’s simultaneous disagreement and capitulation, but they’re not reporting on how Bush/Cheney acted to destroy gay rights in the states.

To be fair, though, Mary Cheney did say (years later) that she almost quit the campaign over the issue, which makes you wonder how much more progress the civil rights movement could have made if John Lewis had almost gotten his head cracked open on the Edmund Pettus Bridge.

There’s lots of other evidence that Mary Cheney is a horrible person (she maxed out to anti-marriage equality Mitt Romney* in 2012, and donated to the senate campaign of George “Macaca” Allen), but for my money, it doesn’t get any better than taking advantage of the work that other people did to overcome the obstacles that she and her father placed in front of marriage equality, then braying to her sister about “being on the wrong side of history.”

That the Cheneys can delude themselves into thinking that any of them are not similarly situated is entirely predictable, but the media, including the overtly liberal media, should not be playing along.