Democrats Have a Frontrunner to Replace Reid as Senate Leader

Democrats Have a Frontrunner to Replace Reid as Senate Leader 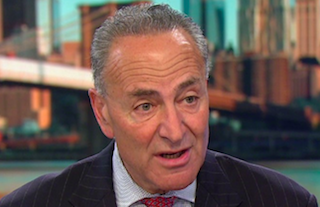 With endorsements from retiring Senate Minority Leader Harry Reid and Minority Whip Dick Durbin, Sen. Chuck Schumer (D-NY) is now the overwhelming frontrunner to take the leadership position in for the Democrats — whether they end up in the majority or the minority — after the 2016 election.

“I think Schumer should be able to succeed me,” Reid told the Washington Post on Friday morning after announcing his planned retirement at the end of next year. Reid predicted the Durbin, who, as the number two Democrat in the Senate is technically in line for the job, would step aside in favor of Schumer, who hols the number three position.

And that appears to be the case. “Senator Durbin told Senator Schumer late last night that he wasn’t running for Leader, and that Schumer has his support,” a spokesperson for Durbin confirmed in an email to Talking Points Memo. “Durbin intends to run again for Whip and has Senator Reid’s support. He’s been speaking with senators this morning.”

In the hours since, Schumer has received endorsements from Sen. Kirsten Gillibrand (D-NY) and Sen. Joe Manchin (D-WV).

Schumer, who was first elected to the Senate in 1998, will end his third term and be up for re-election in 2016. Assuming he succeeds, he will likely become the top Democrat in the Senate when Reid steps down at the beginning of 2017.