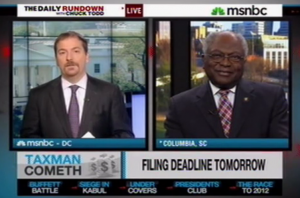 Todd said we’ve “overheard” the kind of deductions Romney would be willing to eliminate under his tax code, including second home mortgage. Clyburn said he’s been part of discussions about these issues, and and it’s worth a look. He added, “But to eliminate it, I’m not too sure that I would discourage what I would call home building, but it could very well have some limit on it.”

When people go to pay their taxes, as most of them will be doing by midnight tomorrow night, they want to make sure that what I’m paying is a fair assessment, and it’s not going to be me carrying this burden by wealthier people continuing to get these tax cuts while big industries that don’t need them get these big tax subsidies […] That is not fair and we need to be more transparent about it. I think there’s something to be said about people who pop their money offshore, and we don’t know exactly what’s in those accounts. When we look at despots in foreign countries, putting their money in Swiss bank accounts, we always have frowned upon that — and I don’t see us saying that people of wealth, especially people wanting to be President of the United States and parking money in a Swiss bank account, that is…

Todd interjected, asking, “You’re comparing Mitt Romney to a despot?” Clyburn replied, “I’m not comparing — I’m talking about the habit of putting money, hiding money in bank accounts. I think there’s something wrong with that.”