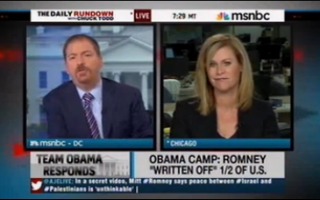 On Tuesday, Daily Rundown host Chuck Todd welcomed Obama deputy campaign manager Stephanie Cutter onto the show, where he asked her to compare Mitt Romney‘s recent comments to donors about the “dependent” 47 percent of voters to remarks Barack Obama made about voters in small towns who “cling” to religion and guns.

“Well, Chuck, he was saying the exact opposite of what Mitt Romney was saying,” said Cutter. “He was talking about how, you know, some people get frustrated by their circumstances and react to that. And that we need to bring everybody together and talk to everybody about how we are gonna strengthen middle class security. Mitt Romney was saying the exact opposite, that 47% of the country are never gonna vote for him because they don’t take personal responsibility for themselves, they consider themselves victims. And that they are never gonna vote for him and they are not his concern. So it’s the exact opposite.”

Cutter later characterized the President’s concern as not neing “about big government, small government,” but about “ensuring that everybody has equal access to opportunity.” As for Romney, Cutter described him as the “guy who said ‘I like to fire people,'” and the “guy who said, ‘if you need help going to college, shop around; go borrow money from your parents.'”

Todd then showed Cutter and viewers footage of a Virginia focus group of undecided voters expressing concern that President Obama cannot get anything done. “Well, I think the President addressed that in his convention speech,” said Cutter. “You know, he put out a forward-looking agenda of where… a road map of where we want to take this country.” She then chalked up the problems in Washington to Republicans who won’t give “one more dime in taxes from the very wealthy” to accomplish things.

Todd pointed out that these voters place equal blame on the President for the gridlock in DC.