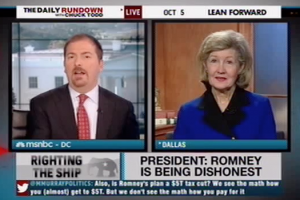 On Friday’s The Daily Rundown, Chuck Todd invited Republican Texas Senator Kay Bailey Hutchison to discuss Mitt Romney‘s economic proposals. Referring to Romney’s past statements, Todd pressed Hutchison to get specific about what exactly it is Romney plans to do.

But first off, Todd asked about Romney’s Thursday night appearance on Sean Hannity‘s show, during which he responded to his provocative “47 percent remarks,” calling them “completely wrong.” It took three weeks for him to say he was wrong, Todd said. Was that three weeks too late?

“It’s been misinterpreted,” Hutchison said. “People do say things in campaigns.” Romney’s trying to put that behind him, she said, and his debate performance showed that he does care. The focus should be on the economics, she said. His plan to jumpstart job creation.

To that point, Todd asked for Hutchison’s take on Romney’s tax plan: Is he pledging to cut taxes or not? Romney is saying he is not going to increase taxes, she said, noting that that’s where he and President Obama differ. “Mitt Romney wants tax reform that does not increase tax on anyone,” Hutchison said, “but yet gives incentives to people to hire.”

“But do you understand how he gets there?” Todd asked.

“He is not going to cut taxes,” she replied. Asked whether Romney needs to provide more details about his plan, Hutchison said Romney does provide specifics. “He says he’s going to make sure that more are working so that more people pay taxes,” she said.

“But that is a hope, that’s not a policy,” Todd countered. That’s not a piece of legislation you can sign. “I think if a president could sign a law that said we will create more jobs, that law would have been signed a long time ago.”

It’s about the fundamentals “that are keeping people from hiring,” Hutchison argued, pointing to the Romney campaign’s ever-reliable point of contention: The Affordable Care Act. Romney has been specific, she added, but it’s been “glossed over.”

That allowed Todd to segue into details, as he asked about Romney’s previous statements about doing away with the estate tax and not going to raise the rate on income from dividends and capital gains (the chief offset from Simpson-Bowles).

Hutchison pointed to retirees who may not be able to make ends meet, arguing that Romney’s plan is trying to encourage savings. That keep rates low is therefore beneficial.

“He is going to lower the deduction capability at the upper levels, not the middle class,” she said, “and he is saying he is — by putting people to work with dynamic scoring, which I think is very important — and that brings in the revenue, the old fashioned way with people working.”