Chuck Todd Compares Newt Gingrich To The Terminator: ‘He Just Sort Of Keeps Showing Up’ 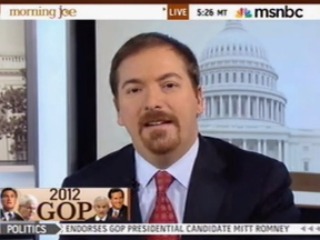 Is this GOP race as good as over? That’s what Friday morning’s episode of Morning Joe sought to find out. MSNBC’s David Gregory put forth the idea that Mitt Romney is actually running a more successful campaign than he’s been given credit for, putting him “in a position now to close this thing in February and March.” Rival candidate Newt Gingrich, meanwhile, has “a more difficult path if he’s going to try to pull something together.”

RELATED: Krauthammer To O’Reilly: If The Race Goes To The Convention, Romney Could Lose

Despite all the talk surrounding Romney and Gingrich, Chuck Todd said he’s keeping his eye on Rick Santorum‘s campaign and on Gingrich’s ability to “be back” like a certain beloved cyborg:

I’m curious to see, you know, Santorum’s messing around in those Tuesday caucus states. You know, does he over-perform in one of those, maybe even beat Romney in the beauty contest in Missouri where Santorum has decided… his Super PAC has put up some advertising just to sort of question things.

Todd later added, “I think Gingrich is trying to get to March and I think, in this case, the best he can hope for is that somehow Ron Paul and [Rick] Santorum just deny Romney some victories. You know, deny him wins in, say, half of the caucus states, and then he can somehow focus on the Southern states and you create this uncertainty.”

Gingrich, Todd noted, doesn’t seem as “engaged” in the race as he was in Florida. “He’s not quite sure how to attack Romney right now,” he said, before concluding: “It does feel like we’re at the beginning of the end. But this is Newt Gingrich, and the guy’s like the Terminator, right? He just sort of keeps showing up.”