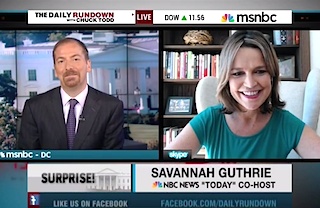 Today was Chuck Todd’s last day hosting The Daily Rundown on MSNBC before he officially takes over for David Gregory as host of Meet the Press. As a surprise, his staff decided to hook him up via Skype with his old friend Savannah Guthrie, who has been on maternity leave from the Today show. Things did not go as smoothly as planned.

The delay on the Skype call was so long that it quickly became impossible for the pair to have anything resembling a coherent conversation.

“Can I call you Mama Guthrie?” Todd asked Guthrie.

“Of course you can,” she responded, about 30 seconds later, after he had already moved on.

They ended up doing the best with what they had to work with. “I know we have some kooky Skype delay going here,” Guthrie said, regretting that they would not be capable of their usual “electric banter.” But she did wish Todd “good luck,” saying she couldn’t “think of anyone better suited to Meet the Press” than him.

An unexpected live address on ISIS from British Prime Minister David Cameron meant Todd did not get the chance to deliver a proper goodbye to The Daily Rundown at the end of the hour. He will begin his Meet the Press duties on Sunday, September 7.

After the show, Todd apologized on Twitter for the awkwardness:

Apologies for rough technical glitches for last show, but u have no idea how amazing our crews were in NYC and DC to get us on air. Kudos