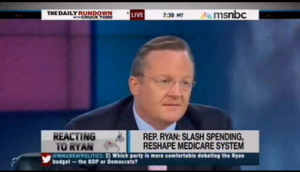 Former White House Press Secretary Robert Gibbs stopped by the Daily Rundown Monday, where he spoke with host Chuck Todd about the future of Medicare, among other topics.

Gibbs gave an example that, under a Romney/Ryan administration, his 83-year-old father would be given a voucher for his medical care, despite having very different medical needs and concerns than his son. “Your father is not going to get that,” Todd interjected, “because they’re not going to do anything to him.” He was referring to the fact that Ryan’s plan would not impact seniors over 55.

“I wouldn’t trust Republicans on Medicare as far as I can throw them,” Gibbs responded, adding that the plan would effectively “end Medicare as we know it.”

“Does the President owe us a plan, then?” asked Todd.

“Let’s be clear,” said Gibbs, “that the President has taken important steps to not only make the Medicare benefit stronger, again, by adding things like preventive health care and we’ve extended the life of the health care…”

“So what comes next?” asked Todd, asking what the alternative would be. Gibbs replied that this would be up for “continued debate.”

Changing topics, Todd then asked Gibbs whether “you guys” were planning to ask the Priorities USA Super PAC “affiliated with the President, President’s own advisers raise money for this Super PAC” to pull its ad insinuating a link between Romney’s influence at Bain and a woman’s death from cancer.

“Let me tell you,” said Todd. “This has been perpetuated mostly by the Romney campaign. let me tell you this, Chuck, the Romney campaign long ago gave up their opinion to be pious on this ad and any ad. Let’s examine one that we know is running, not on the web, just on Fox News. An ad that’s on television that says Barack Obama has done away with the work requirement for welfare. That ad is nothing but a lie. Mitt Romney’s entire presidential campaign right now is built around a lie. Mitt Romney’s on that ad saying he approved it and it’s a lie.”

“But is the rationalization well, they do it, so we’re going to do it?” asked Todd. “Are you comfortable with that ad?”

“Chuck, I don’t have any control over that ad. I’m not part of Priorities Super PAC,” said Gibbs.

The host then reminded Gibbs that he’d once attached John Edwards for a dishonest ad, saying at the time that Edwards could simply call and suggest the ad be stopped.

“Because, look,” Gibbs responded, “I don’t remember or get into the John Edwards thing. I know this. You have an ad that our campaign has nothing to do with.”

“Governor Romney hinted to me,” said Todd, “that he would like some sort of truce and he also, I think, in a radio show said maybe it would be nice if every ad that got fact-checked as false got pulled. Would you guys sign an agreement like that?”

Gibbs once again shot down Romney’s “piousness” on the matter.