Chuck Todd: Democrats Shouldn’t Run Away From Obamacare in 2014
VIDEO

Chuck Todd: Democrats Shouldn’t Run Away From Obamacare in 2014 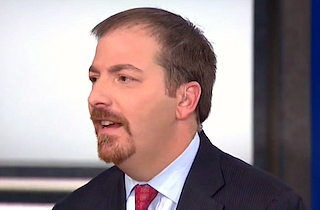 On Morning Joe Monday morning, MSNBC political analyst Chuck Todd argued that Democratic candidates shouldn’t be too quick to run away from Obamacare in 2014, as they will already be held responsible for the bill’s negative aspects, and can divine from historical precedent that running from a president rarely produces a midterm victory.

“I know the playbook says you’ve got to run away,” Todd said. “But they’re already going to own the negative.”

“This was always something that Republicans didn’t understand,” Todd continued, “and what the Obama campaign back in 2012 would say is: ‘Hey, you don’t understand, particularly with Hispanic voters, health care was really popular.’ Particularly with voters who are struggling with everyday pocketbook issues, the idea that the President of the United States went out on a limb and essentially tried to balance out something that has been a problem for a lot of Americans?”

“I think the Democrats got to be careful. If they start running for the hills too much—tell me where that playbook has ever worked? Democrats in ’94 ran away from Bill Clinton. That worked—for the Republicans. Republicans running away from Bush in ’06, that really worked for them.”

“Nothing more fun debating somebody, and I did in ’94, that was running against their president,” host Joe Scarborough said. “It’s just easy, easy pickings.”

“Because then you come across as having no principles,” Todd said.

“You got to get out there and you have to sell all the positive parts of it that you know people in your audience are already enjoying,” Lawrence O’Donnell said, “having their 25-year-old kid on their policy, these things that are kind of invisible elements of the bill. They really got to get out there and say, ‘But, yes, we’ve got these little things that we want to fix.'”