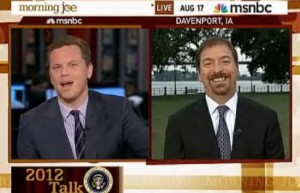 NBC News Chief White House Correspondent Chuck Todd delivered some canny insight into the Rick Perry/Barack Obama dynamic on Wednesday morning’s Morning Joe, observing that President Obama’s inclination to “cut Perry some slack” over recent inflammatory comments might have everything to do with the fact that Perry is the administration’s candidate of choice, and noting that Perry “would have been laughed out of” the Republican primary four years ago.”

Is Perry the man of the moment to a narrow band of extremists, or has he tapped into a broader angst among the electorate?

Todd’s assessment is correct in that Perry is considerably more conservative than the candidate the Republicans selected in 2008, Sen. John McCain. He’s also probably correct in his view that Perry’s campaign will be far more “confrontational” than McCain’s was, but it bears remembering that even the “moderate” McCain participated in a 2008 presidential campaign that resembled Freddy Krueger Glove Night at Chuck E. Cheese‘s.

Todd also observes that the Obama campaign seems to be “licking their chops” at the prospect of a Perry nomination, and wonders if Perry is more like McGovern in ’72 than Ronald Reagan in 1980. He says Team Obama’s calculation is that Perry is no Ronald Reagan.

Maybe I just never noticed it before, but it’s also interesting that, after only a few days of covering folksy and authentic Rick Perry, Chuck is already droppin’ a few of his Gs. If nothing else, this is a possible warning that a Perry presidency could revive the flagging apostrophe industry.