Chuck Todd: GOP Establishment May Not Love Him, But Rick Perry’s ‘Built To Last’ 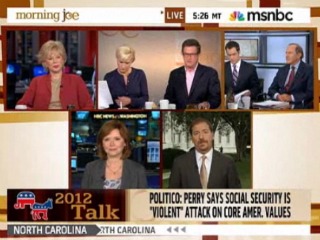 Does the establishment GOP “like” Texas Governor Rick Perry? That’s what the team at Morning Joe sought to find out. Second on the agenda was, of course, “How many talking heads can we fit onto the screen at the same?” The answer is seven.

White House correspondent Chuck Todd kicked things off with a little football talk and discussion of how Perry’s announcement that Social Security is a “violent” attack on “core American values” might lose him a few votes from older Republicans, particularly in Florida.

Capitol Hill correspondent Kelly O’Donnell, meanwhile, is interested to see how Perry will fare in next week’s debate, particularly when it comes to balancing his tendency to speak off the cuff with having to answer for his statements in front of the other candidates.

But what do establishment Republicans in Washington think of Rick Perry? Todd attempted to sum it up:

You look at this primary calendar, and Rick Perry is built to last to make it through a Republican primary. So, you know, there’s sort of… the Republican establishment may not be able to stop him. When you look at just the order of the primaries, the Southern shape of the early part of this calendar. And we’re gonna know a little more, potentially this weekend. Arizona might decide to move up this weekend and that’ll trigger a whole bunch of things. But that in itself, I think, it may not matter what the Republican establishment thinks, even though they’re not crazy about him. But it’s not as if they’ve flocked to Mitt Romney. You know, and that’s been the Romney problem, right? He didn’t unite the establishment. The establishment views him as “…ok. Yeah, I’d be ok with him. He won’t get us killed.”

Take a look at the full segment, courtesy of MSNBC: