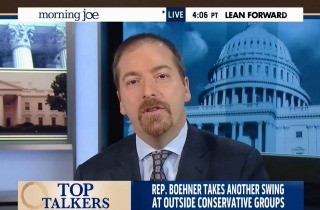 After passing a budget deal through the House with a significant bipartisan majority on Thursday, MSNBC’s Morning Joe’s guests and hosts took a critical look at House Speaker John Boehner’s apparent “victory lap.” NBC News Chief White House Correspondent Chuck Todd said that, while it may be unseemly,” it’s human nature for the Speaker to take aim at conservative groups which have been difficult to work with and have sought to oust him from his office.

“I don’t really understand why John Boehner felt the need to take a victory lap,” Joe Scarborough revealed. “You get the votes, you pass the bill, and, as the governor knows and anybody that is good at this knows, you’re gracious in victory.”

“I think other than you could tell John Boehner feels pretty burned by the entire shutdown,” Todd replied. “These groups let him down to take the fall of making the Republican Party as its most unpopular in the modern era, as far as unfavorable ratings, thanks to the shutdown. So, I think it is human reaction.”

RELATED: ‘Ridiculous!’: Boehner Goes Off on Conservative Groups for ‘Using Americans for Own Goals’