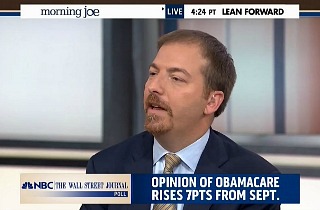 On MSNBC’s Morning Joe, NBC News Chief White House Correspondent Chuck Todd dug into the details of a recent NBC News/Wall Street Journal poll which shows the Republican Party losing public support in the wake of the government shutdown. Todd said that the GOP has simultaneously alienated the voting public and made the Affordable Care Act “less unpopular” in the process.

Todd began by reporting that he found it difficult to find a “good number” for the Republican party in the latest NBC poll. “And then I looked at the top of the poll and I went, ‘oh, 2013,’” Todd said.

Todd added that the “boomerang effect” that Ted Cruz has had on the ACA, making it “less unpopular,” was equally astounding. “And now, we’ve hit a majority where people say, ‘Don’t defund health care,’” Todd observed

Todd said that this would have an effect on the GOP’s support in the midterms, but that could be undone if President Barack Obama’s approval numbers drop in the next year. He noted that Obama’s approval rating has improved over the course of the shutdown.