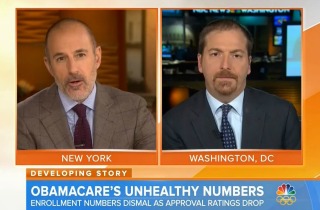 NBC News Chief White House Correspondent Chuck Todd told Today host Matt Lauer on Thursday that the president has put himself in a more difficult position than many had initially imagined by not being clear about what the effects of the Affordable Care Act would be. He reported that, according to the ACA’s architects, the fixes envisioned by bipartisan members of Congress – which may be passed as early as Friday – could “undermine the whole premise of the law” and make it financially unsustainable.

“Right now, you have Democrats on Capitol Hill in a full panic,” Todd began. “They’ve been nervous about this roll-out. They’ve been upset about the website, but now it’s a full on panic.”

“Even before they rolled out the official enrollment numbers, a whole bunch of them have been venting, going to the White House, saying, ‘You know what? Enough of you guys promising fixes. We want to do this. We want to vote on something,’” he continued.

RELATED: Rothman: The Media Loved Building Obama Up, They’ll Love Tearing Him Down Even More

Lauer reported that both Democrats and Republicans in Congress are eyeing passing fixes to the law which would allow those with cancelled insurance plans to get that coverage back.

“Chuck, can you tinker with a part of the program and not impact the viability of the entire program numbers-wise?” Lauer asked.

Todd said he talked to one of the architects of this plan and Massachusetts’ state-level universally health care program who told him “no,” you cannot.

“If you start messing around with this and trying to grandfather in some of these folks, you undermine the whole premise of the law,” Todd said.

“The goes to the problem that the president brought about himself,” the NBC News reporter continued. “They didn’t make this clear. There are always winners and losers in any piece of legislation. There are a small number of losers in here if you want to count losing as in having to pay more for your health insurance.”

“Healthy people are going to pay more. That was always the intention,” Todd concluded. “That was the only way you could make the law work if you wanted to bring down the costs for sick people.”