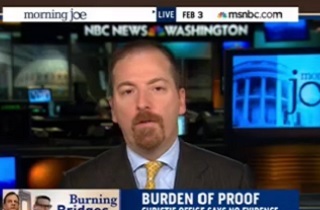 Friday evening saw another bomb drop in the Chris Christie Bridgegate scandal, as David Wildstein claimed, through his lawyer, that “evidence exists” that Gov. Chris Christie (R-NJ) knew about the lane closures central to the scandal as they were happening, clearly contradicting what Christie said at his marathon Jan. 9 press conference. Christie’s office put out a memo in response attacking Wildstein’s character, and on Monday’s Morning Joe, NBC News Political Director Chuck Todd rendered a harsh judgment on that memo.

That memo contained a line that reached back into Wildstein’s and Christie’s shared high school days to attack Wildstein, alleging that “He was publicly accused by his high school social studies teacher of deceptive behavior.”

Host Joe Scarborough asked Todd “Even if he is exonerated and didn’t know anything about the bridge closure, why did he hire so many rank amateurs and, by his own account, thugs around him? He is the guy who let this guy be in charge, and now doing a hit job of his character going all the way back to social studies in tenth grade?”

“We may look back and say when it did all come to an end for Christie, as far as his sort of political — his national political career, we may look back on these past 72 hours,” Todd said. “The accusation was tough enough. The reaction by Christie, when you sit there and you see these — the decision to use examples in high school.”

“I thought it was a horrible moment for him,” Todd went on to say, adding that “I thought the decision to go after Wildstein’s life in high school, it just made Christie seem like the smaller person. Wildstein looked like a small guy in doing what he was doing, and he looked desperate for, there were plenty of people saying he is desperate to have somebody pay his legal fees, and instead of Christie sort of letting that set, which he could have, he piles on, in a way that actually made Christie, to me, look more guilty than inocent.”