Chuck Todd ‘Surprised’ Only 30% of Poll are Independents: ‘Uber-Scary for Both Parties’
VIDEO

Chuck Todd ‘Surprised’ Only 30% of Poll are Independents: ‘Uber-Scary for Both Parties’ 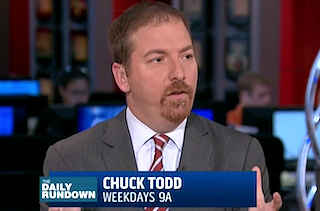 On Thursday morning, MSNBC chief political analyst Chuck Todd and a Morning Joe panel discussed the results of a Wall Street Journal/NBC News poll that found 30% of respondents identifying as independents, a number Todd was “uber-scary for both parties”—yes, he made a Halloween pun—but also surprisingly low given the dysfunction of both political parties.

“At first it looked like only Republicans were going to take the heat, and then you see the undertow has grabbed the president,” Todd said. “Think about this twin billing of the government shutdown—so, Republicans deciding to throw a tantrum—and Democrats looking incompetent, because they can’t launch health care. In some ways I’m surprised that number is only 30%.”

“I think part of it is we’re so engrained in the two-party system,” Todd continued. “What’s really scary among it, by the way: an independent actually does better than a generic Republican candidate. And that goes to this issue when you look at who they are—these are all Perot voters. These are downscale, working-class people who just look at Washington and think they have no clue about what is going on.”

“We used to call them Reagan Democrats,” MJ-regular and former George W Bush communications director Nicolle Wallace said. “They voted for Hillary in the Democratic primary. We know who these voters are. These voters are not the kind of voters that come back to the White House as they roll out government health care. These [voters] are lost.”

“But they want government to work,” Todd said. “That’s why they are mad at the Republicans. It’s this weird—it’s not a weird group, it’s a normal group of people, who simply want government to be fair to them, and say, ‘Get it done.’ Stop doing these things, and by the way: do you know what’s going on in my life?”