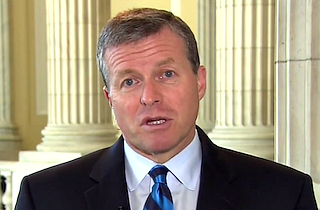 Representative Charlie Dent (R-PA) broke the news on MSNBC’s Daily Rundown that the House of Representatives was considering its own compromise bill, with dates similar to those tentatively agreed upon in the Senate that would fund the government through January 15—the closest to resolution the chambers have come since this stalemate started three weeks ago.

“The House is likely to launch its own initiative as early as today,” Dent told host Chuck Todd. “It would essentially use the same timeframes for the [continuing resolution] and the debt limit as in the Senate negotiations. I believe that would be January 15th for the C.R. and about February 7th or 8th for the debt limit. It would strike the the reinsurance tax, that $63 per head tax for the large self-insureds and the large unions. That would be out and replaced with a two-year delay of the medical-device tax, plus a variation or derivative of the bitter language, minus the congressional staff that would affect the Congress and I think the White House and White House staff.”

“Not to belabor this point,” Todd said, “but congratulations, you guys are funding the government for a whole ninety days. Now what? Why am I not going to be back here with you on January 14th talking about how we are going to avert this next shutdown?”

“I hope that some lessons were learned,” Dent replied. “I hope that the people who are more interested in shutting down the government understand now that we do have very basic responsibilities. Between now and whenever that next deadline is, or the next alarm clock goes off, we’re going to have to deal with a broader fiscal reform. That means people are going to have to be very serious.”

“We’re not asking anybody to check their ideologies at the door,” Dent continued. “We’re asking people to be a problem solver and be pragmatic and get the job done. None of these agreements have everything I like, but at the end of the day, people have to have a capacity to vote yes or get to yes. That’s what’s sorely lacking on both sides of the aisle in Washington, D.C. these days.”