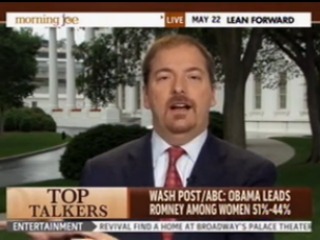 On Tuesday morning, MSNBC’s Chuck Todd brought a touch of shade, if you will, to Morning Joe by hitting ABC where it hurts: right in the polls.

Todd had come on to discuss strategy, “likability,” and issues of importance to voters, using an ABC / Washington Post poll as a jumping off point.

“They are totally in this mode of they’ll eventually win the last argument,” said Todd of the Romney campaign’s strategy. “And that this is about the economy and that all of this likability stuff, all the issues about whether Romney can connect will fade as long as the voter goes into the booth, voting on the economy. And that’s what they think. They think that we overemphasize this. They think they understand why the Obama campaign is going after them personally. That they think that that’s their way to disqualify him. But, you know, they continue to poo-poo it. They think the overwhelming frustration on the economy will get them there.”

Host Joe Scarborough then asked Todd whether he remembered a recent poll that had come out saying Mitt Romney was “up three percentage points among women,” and which number Scarborough himself had guessed.

“But don’t forget, that’s ABC,” Todd said of the poll.