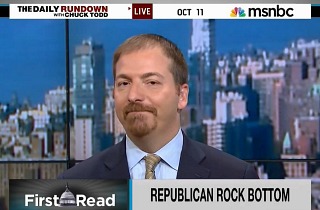 MSNBC host and NBC News Chief White House Correspondent Chuck Todd dug into the numbers in the latest NBC News/Wall Street Journal poll on Friday and called the results in that survey an “unmitigated political disaster” for the Republican Party. He said that the shutdown has resulted in a gap in the generic congressional ballot question which could result in a “wave big enough to flip” the House of Representatives if this standoff had taken place in October, 2014.

Todd began Friday’s The Daily Rundown on MSNBC by informing viewers that Republicans in Congress are trying to reach a deal with the president and Democrats to end the shutdown standoff. “Why are Republican leaders so anxious to find a way out?” Todd asked. “The big reason. It’s our new NBC News/Wall Street Journal poll.”

“It shows the shutdown has been an unmitigated political disaster for the GOP,” Todd added. “These are what our pollsters called jaw-dropping numbers. The kind of numbers you only see once or twice in a lifetime in how fast they moved.”

Todd detailed the results of the survey which found that the Republicans are taking the brunt of the blame for the shutdown from the public. Todd noted that one of the more troubling findings in that poll for Republicans was the generic congressional ballot which found the public favoring Democrats over the GOP by 47 to 39 percent.

“That’s the largest lead Democrats have had since 2009,” he added.

“If this were October, 2014 and not October, 2013, we’d be talking about a wave big enough to flip control of the House,” Todd concluded. “That’s how dire this is for the GOP right now.”