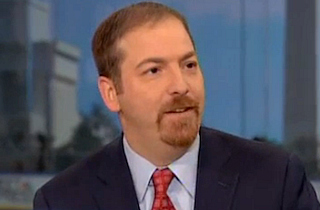 MSNBC chief political analyst Chuck Todd told a Meet the Press panel Sunday morning that the Obama administration’s touting of the “private sector” speed with which its website repair team is working was a tacit acknowledgement that government is inefficient and ineffective at large-scale projects like the Affordable Care Act federal exchange website.

Todd’s comments came in reference to the White House press statement, released on the self-imposed December 1 deadline, outlining the improvements made to Healthcare.gov two months after its disastrous rollout.

“The most distinct thing in this report: ‘the team is operating with private sector velocity and effectiveness,'” Todd said. “That is an acknowledgement that this was a government operation for a long time, and it failed, and now we’re bringing in the private sector folks. That is an indictment of the whole idea of government as the solution.”

MSNBC anchor Andrea Mitchell said the malfunctioning website threatened the project of liberalism by presenting government as structurally incapable of implementing its goals.

“This was a very tough bet, and [Obama] had an obligation to make sure the rollout was not disastrous, in order to achieve those goals,” Mitchell said. “Now they’re at risk of losing the credibility of government as an agent of change, for a generation.”