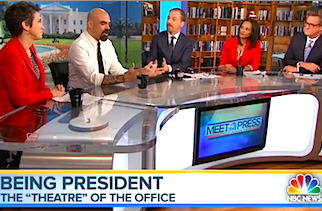 Good news for Chuck Todd and NBC News: Meet the Press was #1 in the 25-54 demo and total ratings this past Sunday for the first time in a long time.

Todd not only got a boost from curiosity surrounding his debut as host but also due to his major get for his first show: an exclusive, sit-down interview with President Barack Obama. The real test will come this coming Sunday when the curiosity has started to fade and, presumably, Todd does not have such a big-time guest to promote.

After years at #1, Meet the Press’ ratings began to slide in the David Gregory-hosted years, reaching a 21-year low in August of 2013. Of course, ratings for the Sunday morning shows have seen declines over all even in just the past year. That historic low for Gregory (854K in the demo and 2.913M total) is on par with Todd’s winning numbers this past week.

But as long as Todd can keep beating ABC and CBS, that will be all that really matters.

Watch Todd’s full interview with President Obama below, in case you missed it, via NBC: