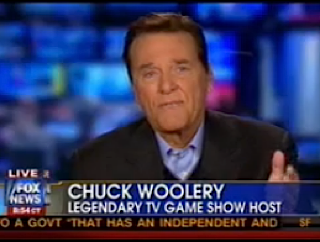 I will be the first to admit that I did not see the sudden resurgence of Love Connection host Chuck Woolery coming. No, the host was a beloved apolitical memory for most of these years, and the Chuck Norris-esque conservative return caught me by surprise. Yet his appearance at CPAC has sparked something of a resurgence as the former host launches a campaign to install term limits in Congress– a campaign that has endorsed the most conservative candidate in the race, “all of them.”

RELATED: Mediaite Interviews The Great Chuck Woolery At CPAC, He Is No Fan Of President Obama

As host of Love Connection, Woolery specialized in matching up people who go well together. “All women are always looking for the dream man, and now voters are looking for the dream candidate,” host Alisyn Camerota noted, and Woolery agreed that this was the case, running down each candidate’s appeal with pseudo-dating profiles including fun facts (Newt Gingrich wanted to be a paleontologist!). Woolery couldn’t pick just one candidate, so “I decided to morph them all into one candidate,” he told the group, “and his name is Newmitt Paultorium.” Yes, there was an accompanying photo.

After a few laughs, Woolery gave a real assessment of the race: “it looks like Santorum is coming up, Mitt Romney held it for a while,” he noted, saying only that he saw it as a “real horse race.” He also gave some details on his new campaign for term limits, RestartCongress.org.