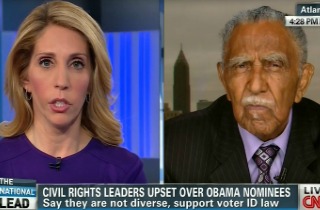 Rev. Joseph Lowery, a civil rights leader and recipient of the Presidential Medal of Freedom, appeared on CNN on Monday where he expressed concerns about President Barack Obama’s judicial nominees to the federal bench in the state of Georgia. He told The Lead fill-in anchor Dana Bash that the president’s nominees do not reflect a level of diversity with whom he and many others are comfortable.

Bash said that the concerns of some opponents of Obama’s nominees stem from the concern that their nominations were secured through “backroom deals” and that they support the state’s voter identification law. She noted that Lowery is joined by iconic African-American leaders including Reps. David Scott (D-GA) and John Lewis (D-GA).

Lowery said that, of five judicial appointments, “only one is African-American.” He added that, since 1978, only three judicial nominees in the state have been black.

“We recognize that somebody in his administration has done him a disservice in giving him these names, and he made a mistake in accepting them,” Lowery continued. He revealed that he spoke directly with Attorney General Eric Holder about the president’s nominees and their “questionable records in regards to race and justice in our system.”

Bash pointed out that the White House defends its actions by saying that they have nominated and confirmed more African-Americans to the bench than the last two presidents. Lowery insisted that, while it is not Obama’s “fault,” this record of achievement has not been reflected in appointments to the federal bench in Georgia.

He concluded by praising Obama’s overall performance in office, but noted that this issue is “critical” and requires rethinking from the White House.