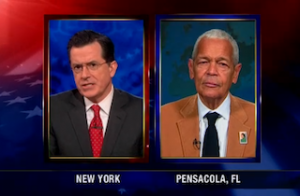 Stephen Colbert invited Chairman Emeritus of the NAACP Julian Bond onto The Colbert Report Wednesday night to discuss the Supreme Court’s recent case on the Voting Rights Act. The septuagenarian civil rights pioneer did not hesitate to express his distaste for Justice Antonin Scalia, who recently referred to the legislation as a “racial entitlement.”

Colbert began the interview by presenting the premise that “racial discrimination is over,” a supposition that Bond swiftly rejected. “If anything,” Bond said, racism “has increased” during President Obama‘s time in office. “His presence angered many people who accused him of being President while black,” Bond added, eliciting laughs from Colbert’s audience.

On Justice Scalia’s assessment of the Voting Rights Act specifically, Bond said, “He is the Rush Limbaugh of the Supreme Court. He says inappropriate things over and over again.”

Bond did not have anything kinder to say about another one of the Court’s most conservative members, Justice Clarence Thomas. Asked by Colbert why he and Thomas view issues of race so differently given their similar roots in Georgia, Bind was unequivocal.

“I think Justice Thomas and I have lived different lives and we’ve drawn different lessons from the lives we’ve lived,” Bond said. “He thinks this way and I think that way, and I’m right.”

Unfortunately Colbert did not have enough time to hear his guest’s views on every member of the Supreme Court, but in Julian Bond he did find a fiery “opponent” for the issues of race and the right to vote without intimidation.