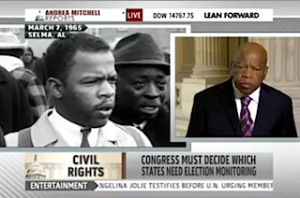 Civil rights pioneer Rep. John Lewis (D-GA) spoke out against the Supreme Court’s Voting Rights Act decision on MSNBC Tuesday afternoon. Lewis predicted that the Court’s ruling will spur protests from “thousands of people” of all races and insisted that protections for minority voters are even “more relevant today than back in 1963.”

“I think what happened today with the Supreme Court will motivate hundreds and thousands of people, African-American, Latino, White, Asian-American, Native American, men, women, students, to come out,” Lewis told Andrea Mitchell. “The vote is precious. It is sacred.”

Lewis recalled marching on Washington in August 1963 and seizing on the rallying cry, “One man, one vote.” He said that fundamental principle is “more relevant today than back in 1963.” Speaking directly to members of the Supreme Court, Lewis said, “Don’t forget our recent history. Walk in our shoes.”

“I didn’t think that on that day when President Johnson signed the Voting Rights Act,” Lewis said, “that I would live to see five members of the United States Supreme Court undoing what President Johnson did with those pens. And i have one of the pens that he used to sign that law at my home in Atlanta. And when I get home, I will pick up that pen.”

“And perhaps could you write a note to one of the justices,” Mitchell suggested.

UPDATE: In a previous version of this post, Rep. Lewis was incorrectly labeled as a Republican. He is a Democrat.