Claire McCaskill Rips Ted Cruz, Todd Akin: GOP ‘Base’ Wants To Drive ‘Off The Right Edge Of The World’
video

Claire McCaskill Rips Ted Cruz, Todd Akin: GOP ‘Base’ Wants To Drive ‘Off The Right Edge Of The World’ 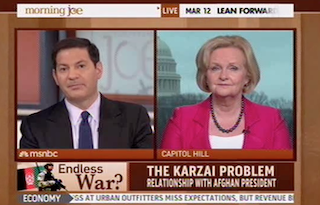 Sen. Claire McCaskill joined Morning Joe on Tuesday, taking a critical look at the GOP and its handling of some recent issues. Specifically, she took aim at Rep. Todd Akin, against whom she recently won re-election, and the likes of Sen. Ted Cruz, who she said wants to “drive as hard as they can off the right edge of the world.”

In light of the senator’s re-election, Mark Halperin asked whether she had any advice for Democrats facing tough elections, to which McCaskill replied that it wasn’t all about siding with President Obama, but rather defending their principles with their votes.

And there’s a silver lining…

“On the other side, it’s a mess,” McCaskill added. “They really have a civil war in their party right now. Joe, your guys are fighting with each other. You’ve got people who are willing to compromise and who understand the beauty of compromise in our democracy, and then you have people like Ted Cruz and some of the others that just think that they want to drive as hard as they can off the right edge of the world.”

She went on to attribute her victory to the Akin’s extremism. “The reason I could win was, frankly, they nominated a flawed candidate that was so extreme,” she asserted. “It wasn’t what Todd Akin said that was the problem, it’s what he believed. And that is the base of the Republican Party right now.”

“Congratulations on bankrolling the efforts to let everybody in Missouri know exactly what Todd Akin believed,” Joe Scarborough replied. “I think we have extremes on both sides.”