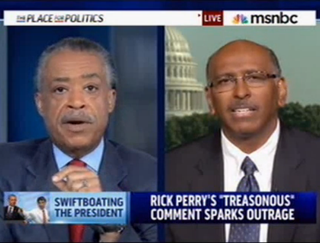 If anything good* has come out of the first two days of Rick Perry‘s presidential campaign, it is this following clip, a wildly entertaining, somewhat difficult to follow discussion hosted by Al Sharpton and flanked by Bob Shrum and Michael Steele, though the latter seems to steal the spotlight from the other two for much of the segment. Between calling Ben Bernanke “treasonous” and saying a “big black cloud”** (the national debt) was flying over America, Perry has raised some eyebrows, but Steele insisted the attacks on Perry were “silly.”

Sharpton began the discussion by asking whether Perry had “crossed the line,” which Steele immediately dismissed as “part of the dog days of summer” and “a little bit disingenuous” on the part of those on the left to be offended. He also claimed that similar things had been said about almost any candidate running for national office, which Sharpton immediately challenged, as someone who had run for national office. Steele responded with a very audible sigh, stating, “excuse me, Al, there’s a difference between being a candidate and running against a president and having an open primary or situation where there is no president to talk about. He added that calling the economy a “black cloud” was “a reasonable statement” and concluded, “you’re taking it too far, as usual.” This was all said amid loud protests from the host, until fellow panelist Shrum jumped in to decry calling “the guy who got Osama bin Laden… somehow not patriotic” and telling Steele “it’s not a joke!”

Sharpton, of course, didn’t take this sitting down, and questioned why Steele got “insulted” “when someone just questions you on whether it’s over the line,” and challenged him to explain why a former Bush-affiliated Republican had called Perry out on the remarks. After some more unintelligible shouting, Steele replied that said Republican was one of many “in a political pissing match” with the Perry camp, as the Bushes and Perry have had a longstanding feud. “There’s nothing enlightening about any of this discussion!” Steele yelled at Shrum and Sharpton, both trying to get through to him simultaneously.

Sharpton finally got the floor for a bit and reminded the audience about the Jeremiah Wright affair, arguing that Perry’s comments were “silly” but that “anything anyone that went over to [the Obamas’] house” was up for grabs. “This is a revolution to you!” Steele shouted back. The crosstalk went on straight through to Sharpton shouting over everyone that the segment had ended– we’ll leave it up to you who won the debate.


*”good” defined as memorable and entertaining, not as in “benefits humanity in any sweeping way”
**Perry’s “big black cloud” quote caused quite a stir as initially presented by MSNBC and ABC News, but as our own Tommy Christopher and others have noted, the quote appears to have been selectively edited.