Clay Travis Has Become the Sports Version of Milo Yiannopoulos 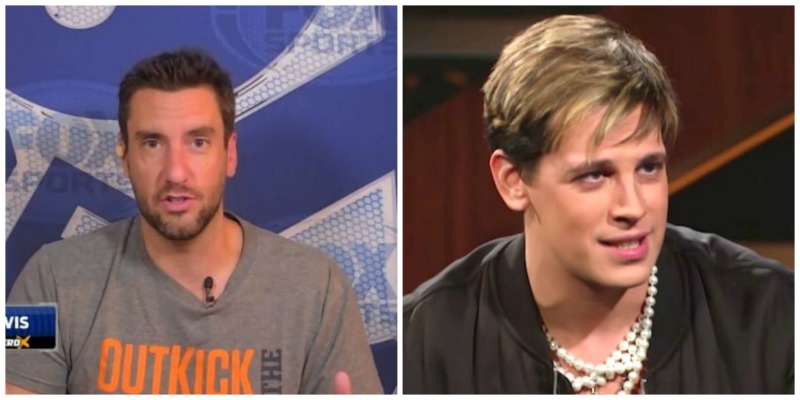 “The First Amendment and boobs.”

With those five words, Fox Sports Radio host and Outkick the Coverage founder Clay Travis pushed himself into mainstream consciousness as his declaration of an absolute love for boobs during a CNN segment led to anchor Brooke Baldwin losing it and eventually cutting his mic. Almost immediately, his appearance was widely reported on and discussed by the news media, and he became the top-trending item on Twitter.

Which, of course, was the whole point.

While many mainstream media consumers may not have heard of Travis before Friday, he has been a known commodity in the sports media world for roughly a decade. And by known commodity, I mean his specific brand of douchebaggery and provocation has brought him name recognition, radio jobs and a deal with Fox Sports. But, for the most part, until a month or so ago, he was really only known to sports fans. That was until his relentless focus on exposing ESPN as a bastion of liberalism and political correctness gave him his breakthrough — the Robert Lee/ESPN kerfuffle.

Yep, Travis was the one who broke the story of ESPN reassigning an Asian-American football announcer from a University of Virginia game due to his name being Robert Lee. Since this story fit perfectly into so many pre-set narratives, especially within the conservative media world, Travis became the go-to expert on ESPN’s descent into identity politics and left-wing preachiness. And while he was a natural fit over on Fox News, he was also welcomed on other cable news outlets, increasing his exposure to a mainstream audience.

So when the Jemele Hill controversy broke last week, Travis was still fresh on producers’ minds when it came to booking guests who could discuss Hill’s “white supremacist” tweet about the president. And thus we end up with the situation of Travis appearing on Baldwin’s program so he could provide the counter viewpoint in a discussion. And, of course, he takes the opportunity to say how much he loves free speech and boobs on the air. (A line that he’s used before in print and on the air.)

One can debate whether his words were offensive, inappropriate or merely idiotic, but the main takeaway here is that they were definitely meant to draw attention to him. He had that line keyed up and was waiting to say it on CNN. And in the end, he got his wish — more attention for Clay Travis. Because when you’re a provocateur, that’s all you do. You provoke in the hopes of building your personal brand.

In this way, Travis is really no different than perhaps the most famous of all attention-seeking provocateurs — Milo Yiannopoulos. Before his swift fall from grace over comments seen to be endorsing pedophilia, Milo quickly rose through the ranks of conservative media. And he went from being a relative nobody to a huge name by fully embracing a cultural movement — Gamergate. From there, via force of personality and tons of hateful trolling, Milo was able to create a (seemingly lucrative) brand unto himself.

The fact is, we live in an age where provocation is good business. In this age of outrage, the one who can create the most anger will almost always see more and better opportunities for themselves. Even if Milo’s penchant for over-the-top offensiveness caught up with him, he’s still a well-known name who may still be able to find a way to come back. In the end, provocation for provocation’s sake is a solid business model, especially in this current era.

Whether it is Milo or Ann Coulter or Tomi Lahren, it has been proven that just ramping up the outrage, tossing bombs left and right, picking fights and acting in a general assholish manner will work out for you in the end. (Hell, those are essentially the qualifications needed to get a spot on Fox News’ prime time lineup.) It doesn’t matter if you constantly contradict your arguments or toss your credibility out the window on a near daily basis, the only true concern is getting the spotlight shown on you. Always.

The next time Clay Travis shows up on your television, just remember that his job is to draw attention and peddle anger.

And he’s laughing all the way to the bank.