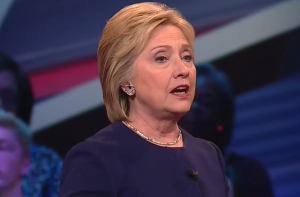 When it comes to presidential elections, the cliche that honesty is the best policy is ironically false. Hillary Clinton learned that to her peril in last night’s CNN Democratic town hall, when giving an answer about poverty in white communities.

I’m the only candidate which has a policy about how to bring economic opportunity using clean renewable energy as the key into coal country. Because we’re going to put a lot of coal miners and coal companies out of business, right Tim?

And we’re going to make it clear that we don’t want to forget those people. Those people labored in those mines for generations, losing their health, often losing their lives to turn on our lights and power our factories.

I bolded that one sentence because that part– and that part alone– is what you’re going to hear in about a dozen Republican ads this fall.

Seriously, what was Clinton thinking? It’s one thing to say that you’re going to bring clean energy jobs to coal country. I suspect telling a third-generation coal miner that he’ll work in the industries that destroyed his job will go over like a lead balloon, but it’s the thought that counts.

But Clinton’s statement is so, so much worse. She could have accurately noted that coal has been declining for a decade because of market forces. But instead, Clinton makes it clear that she is the one who is going to destroy jobs through government regulation. It would have been barely more palatable if she phrased it just in terms of shutting down coal companies, but she went out of her way to say the miners will be losing their jobs. It was an completely unforced error that only highlighted the cons of her energy platform and ignored the pros completely.

It’s a ready-made gift to Republicans, allowing them to resurrect the War on Coal line they used to great effect in the 2014 midterms and lesser effect in the 2012 presidential election. Ohio, Pennsylvania, Virginia; all three are major swing states with substantial coal production. Even outside those states, the working class are unlikely to take well to Clinton offhandedly saying she’ll destroy jobs. The fact that Clinton’s remark sounds better in context will matter about as much as it did for “You didn’t build that,” and “47 percent.”

Presidential politics aside, Democrats hope to win contested Senate elections in Ohio, Pennsylvania, Illinois, Indiana, and Kentucky in 2016. Clinton said that “we” will put coal miners out of work, making it easy for Republicans in those states to tie Clinton’s remarks to their opponents. Longtime Clinton supporters like Ohio’s Ted Strickland and Pennsylvania’s Joe Sestak will be forced to either denounce Clinton or embrace her, a win-win for Republicans.

In many ways, it’s a comment that perfectly encapsulates the shifting Democratic electoral strategy and their abandonment of their former base. There was a time when a Democrat couldn’t hope to be elected president without running on how they would add jobs in working class communities and without appealing to blue collar union voters. No one did it better than Hillary’s husband Bill Clinton.

Today, Clinton’s presidential ambitions rise and fall on winning the Obama coalition. She gives wooden, sloppy answers on issues of importance to rural whites, and has crafted answers on slavery reparations and on why saying “radical Islam” is offensive. But the Obama coalition relied on getting a certain percentage of Reagan Democrats as well, the same voters who are most likely to be swayed by the hyperpopulism of Donald Trump.

Clinton may act flip towards the loss of coal jobs her energy policies will bring, but without a change of rhetoric she could also see a rise in unemployment in a constituency she cares deeply about: Democratic politicians.