Clinton Refuses to Apologize for Using Private Email: ‘It Wasn’t the Best Choice’ 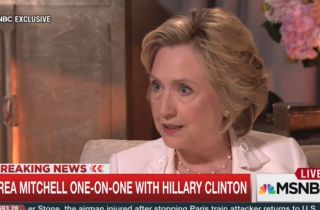 Democratic presidential frontrunner Hillary Clinton on Friday declined to apologize for her decision to exclusively use a private email account and server while serving as secretary of state, but said she disagrees with her choice to use one account for both work and personal correspondence. The former First Lady did, however, apologize for the confusion and controversy surrounding that decision.

“At the end of the day, I am sorry that this has been confusing to people and has raised a lot of questions, but there are answers to all these questions,” Clinton told MSNBC’s Andrea Mitchell. “And I take responsibility, and it wasn’t the best choice.”

The email controversy has dogged Clinton’s presidential campaign from its outset, resulting in falling poll numbers and lost ground in key early primary states. Her favorability and trustworthy ratings have fallen as voters question whether she has been truthful about her email setup. Clinton said those low poll numbers “certainly” bother her, and insisted she is “very confident that by the time this campaign has run it’s course, people will know that what I have been saying is accurate.”

As a senator, Clinton said, she used a private email account and “was not thinking a lot” about the decision to use one when she began her work at the State Department, brushing it off as a secondary concern. “There was so much work to be done,” she said. “We had so many problems around the world. I didn’t really stop and think what kind of email system will there be.”

Clinton also maintained, as she has done frequently on the campaign trail, that everything she did was legal and in accordance with the State Department regulations, and that it “would have been better” if she had used separate email accounts. She also said it is “frustrating” that her emails are not being released faster by the State Department, but acknowledged that “there is a process that has to be followed.”