Clinton Responds to Palin: ‘Not Going to Attack Anybody for Being a Man or Woman’
VIDEO

Clinton Responds to Palin: ‘Not Going to Attack Anybody for Being a Man or Woman’ 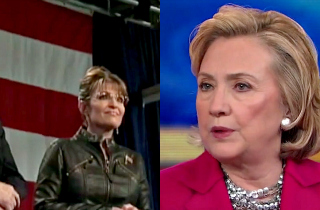 In the second half of her interview with Good Morning America’s Robin Roberts, presumed 2016 candidate Hillary Clinton responded Tuesday morning to Sarah Palin’s tweet in which the ’08 GOP rival alleged that Barack Obama “fired the first shot” in ye olde “War on Women” when his campaign tasked Clinton with criticizing Palin immediately following her announcement as John McCain’s running mate, something Clinton claimed in her new book she refused to do.

“Well, that’s not exactly what I said,” Clinton told Roberts. “What I said was, beginning the process of working with then Senator Obama, after I ended my campaign, we had what I describe in my book an awkward but necessary meeting to clear the air on a couple of issues and one of them was the sexism that unfortunately was present in that ’08 campaign. …That very first day, the Obama campaign said we want you to go out and criticize her. And I said, ‘For what, for being a woman? No. Let’s wait until we find out where she stands.'”

“I made it clear I’m not going to go attack somebody for being a woman or a man,” Clinton added. “I’m going to try to look at the issues, where they stand, what their experiences, what they intend to do, and then that’s fair game.”

Clinton added toward the end of the interview that McCain was her favorite Republican lawmaker.