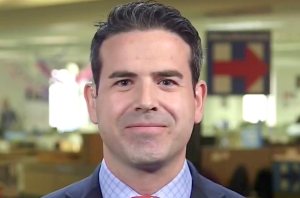 I won’t bother spending too much time rehashing exactly just how bafflingly stupid it was for Clinton to try to claim during a Fox News Sunday interview that FBI Director James Comey said that her answers about her handling of her private email server were “truthful.” Everyone in the nation watched Comey’s press conference and testimony. Everyone watched as he laid out exactly how every single excuse Clinton has given was false: she did send classified material, it was marked classified, she should have known it was classified, and she absolutely did not turn over all her work-related emails. There’s a reason The Washington Post gave her the worst possible score in its fact-check.

But along comes Fallon Monday morning, with the unenviable task of cleaning up his boss’s mess. He did a good job of giving a coherent answer that sounds like it could be true.

I think the question that she got yesterday was sort of suggesting that she had misrepresented things to the American people over the last several months. And what she attempted to indicate in her response was that Director Comey was very clear when he was asked in the hearing before Congress last month about the nature of the answers she gave in her interview to the Justice Department and Director Comey was quite clear he had no reason to believe that anything she ever said to the Justice Department was at all untruthful.

And what she was indicating in that interview to Chris Wallace was that what she said to those Justice Department interviewers was entirely consistent with what she has said to the public for the last several months in the many questions we have answered on this issue.

…which is a whole buncha lies and half-truths, unfortunately.

UPDATE (9:59 PM PM ET): I assumed Fallon was alluding to Comey’s exchange with Jason Chafettz here, since that’s the section the Clinton campaign pointed to in a statement to WaPo‘s factchecker. But in an email to Mediaite, Fallon points out that in another part of Comey’s testimony, he does indeed say that Clinton was “not untruthful” in her answers. I’m more than happy to concede this point and say Fallon was right here.

But just glancing at the transcript, it’s abundantly clear that Clinton and Wallace were talking about her comments to the American people.

WALLACE: I want to ask about one aspect, what you told the American people.

I am confident that I never sent nor received any information that was classified at the time.

I had not sent classified material nor received anything marked classified.

WALLACE: After a long investigation, FBI Director James Comey said none of those things that you told the American public were true.

CLINTON: Chris, that’s not what I heard Director Comey say, and I thank you for giving me the opportunity, in my view, clarify.

Director Comey said my answers were truthful, and what I’ve said is consistent with what I have told the American people, that there were decisions discussed and made to classify retroactively certain of the emails.

WALLACE: But in a congressionally hearing on July 7th, Director Comey directly contradicted what you had told the public. (BEGIN VIDEO CLIP)

At the absolute best, Clinton made a lie of omission, seizing on an out-of-context remark from Director Comey and using it in a context she knew was incorrect. Realistically, she blatantly lied. That required Fallon to blatantly lie on her behalf, saying that she was trying to say something that a blind man could see she was not.

The worst indictment I can offer Clinton and her staffers’ denial of the plain facts is this: I’m reminded strongly of Donald Trump.