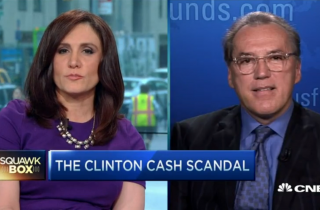 On Tuesday morning, the hosts of CNBC’s Squawk Box grilled U.S. Global Investors CEO Frank Holmes about his role in the uranium deal that’s become a media frenzy following reports that some of the involved parties had also made donations to then-Secretary of State Hillary Clinton‘s charitable foundation.

Anchors Joe Kernan and Michelle Caruso-Cabrera repeatedly pressed Holmes on his uranium holdings that benefited from the eventual Russian deal that was, in part, approved by Clinton’s Department of State.

Holmes claimed that the New York Times should never have included his name in their uranium deal exposé, because his company simply invests in a “cluster” during a “secular bull market.”

“Were you in a position to benefit from approval of this deal at the same time you were writing checks to the Clinton Foundation?” the hosts asked repeatedly.

“I give to many different types of charitable organizations,” he replied at one point.

Visibly frustrated, Caruso-Cabrera told Holmes: “When people finish watching this interview they’re going to say it wasn’t unequivocal on your part and that there wasn’t a lot of clarity.”

“You’re making a lot of conjecture,” the investment officer replied. “It’s a political battle between some of the press in New York that don’t like the Clintons and other people involved.”

And at the very end of the interview, Andrew Ross-Sorkin jumped in, seemingly out of nowhere, to offer Holmes one last shot to get anything off his chest. “Anything you want to say?” he asked. “Because right now, it’s all a big haze for us.”

As you can imagine, the answer was insufficient.