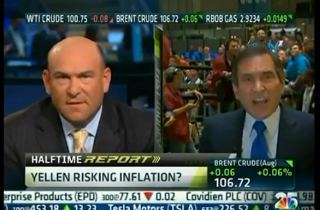 If you’re at all familiar with CNBC’s Rick Santelli, you know he almost never appears on the network without a shoutfest ensuing.

The financial commentator — long considered the godfather of the tea party movement for his 2009 remarks — tends to battle with his colleague Steve Liesman over wonky monetary policy questions involving the Federal Reserve, government intervention, and inflation.

During a Monday afternoon debate, the CNBC panel — including Liesman — tore into their famously outspoken colleague by telling him that all of his dire predictions about the Fed’s actions have been proven wrong.

After a series of rants from Santelli on Fed Chair Janet Yellin possibly risking inflation, host Scott Wapner intervened to say that “the jury’s still out as to whether the Fed is going to help.”

This set Santelli off: “Jury? Who are you talking about? Who’s the jury specifically? Academia? Professors? That valet you let park your car?”

Co-panelist Josh Brown piled on: “Rick, you already decided this wasn’t going to work five years ago. Is some of your anger about confirmation bias?”

“I was right! I was right!” Santelli shouted, walking off-camera to applause from Chicago floor day traders. “End of conversation. Hasta la vista!”

But he returned when Liesman began torching him: