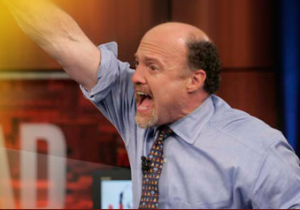 On his program Mad Money last week, CNBC’s Jim Cramer couldn’t poke his viewers enough about Facebook. “If you can get in on the actual IPO, then I think Facebook is a no brainer,” Cramer said confidently. “We all know this one’s going to pop like crazy on its first day of trading, so if you can get in on the deal, I think you should try to get your hands on as many shares as possible.”

“Facebook will almost certainly come public to a huge spike when it starts trading on Friday,” he added.

But what about the naysayers?

“…With all the hoopla over Facebook, maybe it’s time for a reality check. Is the recent wave of social media IPOs merely a repeat of the hideous, horrible, money losing dot-com bubble? Are we making the same mistakes all over again? Is the tremendous amount of excitement over Facebook simply irrational exuberance? …Maybe you shouldn’t buy it at all. No, no, no, and no! When you look at the facts, the bubble talk seems foolish. Facebook isn’t the epitome of a dot-com era mindset that lost people fortunes. It’s a tremendous company that made people tremendous growth. Eyeballs, the old stupid metric that got people in so much trouble the last time around. You could analyze the stock by the numbers. You don’t have to be an ophthalmologist to count how real the eyeballs are.”

Cramer said he was confident the “anti-Facebook bubble heads” would be wrong.

“What’s happening now is nothing like the insanity that gripped the market in 1999,” Cramer said, noting that there were 289 Internet-related IPOs that year, which is much more than today.

“Facebook is a fabulous company, one that’s much better than any social media IPO we’ve seen so far,” Cramer said. “I think the stock will succeed, like LinkedIn, not flunk like Groupon or Pandora.”

But then, as we all know now, Facebook’s IPO lost a major chunk of its value over the next few trading days.

“Look, it’s all in the wrong hands,” Cramer said on Tuesday morning’s Squawk on the Street. “It’s a hot potato. The company didn’t do a good road show. Suddenly, you go back and realize, wait a second, maybe this was like all the other social media companies that became public. Which were, by the way, disastrous…All of the deals that have come have lost a lot of money for people. And this now seems like still one more of them.”

A mere two trading days after Facebook shares went IPO, they had fallen from the $38 offer price to below $31 intraday. When this happened, market mad man Jim Cramer ridiculously commented on CNBC that the underwriting brokers should have known that the shares weren’t worth $38. What were they thinking? These comments are in direct contrast to comments prior to the IPO that Facebook shares were something that everyone needed to have.

Of course, Cramer is disingenuous. He well knows that it is the job of the sell-side broker to get as much for their client – in this case Facebook – as they possibly can. Who is he kidding?

And his comments on CNBC on Tuesday: