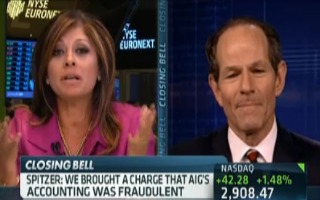 Former New York State Attorney General and host of Current TV’s The Viewpoint, Eliot Spitzer, appeared on CNBC with Maria Bartiromo to discuss why six of eight charges his office brought against the investment firm AIG and its leadership, specifically Maurice “Hank” Greenberg, were dropped. The interview became contentious when Bartiromo hammered Spitzer for going after Greenberg for personal reasons – a charge corroborated by his former colleagues when he served as Attorney General.

Spitzer said that they should deal in facts about AIG, rather than the recently dropped charges. “Hank Greenberg was thrown out by his own board…”

“Under pressure from you,” Bartiromo said, cutting him off. “In fact, some would say that the collapse of AIG lays at your feet because if Hank Greenberg was there he would not have allowed some of that craziness and that risk to be taken on.”

“There are still some people who think that the sun revolves around the Earth,” replied Spitzer. “Hang Greenberg’s accounting was fraudulent.”

“Come on,” replied an increasingly agitated Bartiromo. “You can’t say fraudulent because there is no indictment. You can’t just throw around the word fraud.”

Spitzer said that his work as New York’s Attorney General led to the firm cleaning up its act which resulted in the dropping of most of the charges against Greenberg.

Spitzer laughed as Bartiromo played clips of former New York Attorney General Dennis Vacco claiming that he believed Spitzer was motivated by “personal animus” which led to the charges against Greenberg.

“I know this is cable TV, but facts matter,” said Spitzer refuting Bartiromo’s claim that no evidence has surfaced to corroborate allegations that Greenberg or AIG engaged in accounting fraud.

When Spitzer asked if Bartiromo had read a judge’s opinion that says Greenberg was a “co-conspirator” and said that she was “under oath right now” to answer his question, Bartiromo laughed.

“I am not under oath right now, and I am not your courtroom,” said Bartiromo. “You are on my show and thank you very much for joining us, Eliot Spitzer.” She went on to refute his claim that the judge’s opinion named Greenberg as a conspirator – Spitzer, in turn, accused Bartiromo of being married to Greenberg’s public relations spin.

Watch the interview below via CNBC: