CNN 8pm Speculation: What Next Week’s Schedule Can Tell Us

CNN 8pm Speculation: What Next Week’s Schedule Can Tell Us 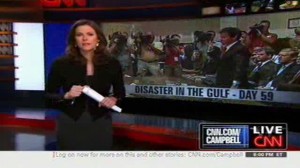 We have CNN’s schedule for the 8pmET hour next week when Campbell Brown‘s out.

With all the speculation about what CNN’s decision will be for the hour, what can we learn from this varied schedule?

I’m going to go with “just about nothing.” But we have the schedule, so we’ll let you know, and you can give your own thoughts in the comments. Also, we’ll recap the week of speculation from around the media world.

Tonight, Don Lemon, a CNN Newsroom anchor, will be at the desk. On Monday, Larry King hosts a two-hour telethon for the Gulf oil disaster, similar to what he and CNN did for the Haiti disaster. Here’s part of that release:

So now you know what CNN will decide to do about their 8pmET hour and prime time strategy as a whole, right?

• Eliot Spitzer is about to sign a deal to host the 8pmET hour, despite a “loss of credibility,” says Daily Intel.

• Kathleen Parker is the “leading candidate” to pair up with Spitzer for the Crossfire-like show, says the NY Post today.

What about Spitzer, Morgan and Parker at 8pmET? And Larry King and Gary and Tony and their baby? Discuss.