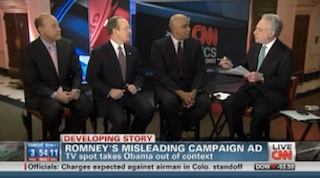 Yesterday, Mitt Romney’s campaign released its first television ad and, thus far, the reviews have been…uh…mixed. The biggest point of contention was a moment where the ad shows 2008 footage of then-Candidate Obama making fun of a quote made by one of John McCain’s aides. However, the Romney ad makes it seem like Obama is saying the quote himself. When CNN asked Romney’s team about the error, they cheerfully responded that they did it on purpose.

This appears to have really ticked some folks at the news network off as CNN just did a segment on the ad that was one of the most blistering things we’ve ever seen.

From moment one, the CNN segment makes it clear that the Romney team is making a strikingly and depressingly cynical move. And, really, you can’t argue with that description seeing that the campaign has issued a press release confirming that they know about the error and that Romney spokeswoman Andrea Saul cheerfully told CNN that they purposefully “turned Obama’s attack back on him.” However, while regular folks can be offended by such sleazy tactics, it’s rare to see Wolf Blitzer’s voice when he called the ad a “new low.” Perhaps there was something in Saul’s smile that really got under everyone’s skin.

Paul Begala explained the reason why news outlets may be taking this so personally, pointing out that the strategy of the Romney team seems to be to get use the ad to trick the media into reporting on a fight between their candidate and the President.

“In that sense, it’s extraordinarily cynical because now they’re manipulating the media because we want to cover the fight. We have to cover the fight. ‘The Obama campaign says it’s a lie, the Romney campaign says it’s not.’ But there’s an objective reality here. It’s like if they said the moon was made of green cheese and the Obama campaign said ‘No, it’s a rock’ and we’d say ‘Candidates Clash On Lunar Landscape.’ No! It’s a rock! This is a lie and I think we should say so!”

The message is clear; candidates lie to America all the time, however, if you make it clear that you know you’re lying, you put the media in an awkward position and that pisses them the hell off.