CNN Actually Has Kinda-Breaking News to Report on MH 370 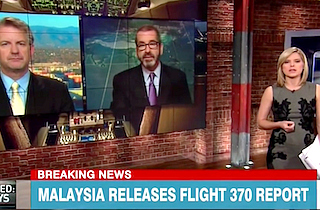 Lord, it has been a long slog in the desert for CNN and their fifty-five-day search for MH370, one that has been marked recently by a pointless two-step of breaking a possible lead all day long only to spend the next twenty-four hours debunking it.

But Thursday morning, the Malaysian government released its preliminary report on the flight’s disappearance — an actual, existentially-verifiable development that rises above the “somebody spotted something in the ocean that’s probably trash” level on which CNN has been operating for the past two months.

New Day host Kate Bolduan brought on two experts and cautioned that they should be “prepared to be underwhelmed” by the report, a welcome dash of realism absent the network’s otherwise breathless coverage. The experts, at least for their initial segment, were restrained in their analysis, discussing the limits of the data rather than grasping at any stray piece of information as a new lead. (And the data does seem to verify some earlier theories; take progress where you can get it.) If this were CNN’s only segment on the plane today, it would be solid news coverage.

Of course, it wasn’t. CNN spent the next hour and counting (they’re still going as of this post) reporting this thing to death with every gadget in the drawer. But for at least a few minutes, the network earned its BREAKING NEWS chyron.