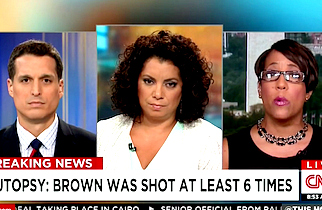 CNN contributor and lawyer Mo Ivory wrangled with CNN legal analyst Danny Cevallos on Monday morning following the Brown family’s press conference on the independent autopsy performed on Michael Brown. Ivory lambasted Darren Wilson, the Ferguson police officer who shot Brown, not only for the shooting but for reaction, causing Cevallos to caution against speculating as to others’ psychological states in extreme circumstances.

“He wasn’t even trying to come to Michael’s aid,” Ivory said. “He just shot him down and then he just stared at him. I don’t understand anybody that would see a child bleeding out of their head, or an adult, and not bend down immediately and try to stop the bleeding, or check if they’re alive, or give some aid. He just stood there and stared at him. Which to me goes to his state of mind. A complete state of, ‘Oh my god, what did I just do.'”

“In times like these, everybody becomes an expert on ‘how I would have reacted'” Cevallos said. “When you look at the video, you could interpret it as, boy, that seems a little cold standing there, but he can’t leave; he has to be on the premises. The problem, everybody becomes an expert on human emotion during times of crisis. Why don’t we stick with the facts we know? Those will be the autopsy records. Watching an officer walk around after a shooting, I don’t know that that’s as compelling.”

“The forensic evidence is important, and I’m not minimizing that at all as compared to what the officer’s reaction is,” Ivory said. “But you also can’t minus out what somebody’s state of mind is. Officers are trained to deal with this type of situation. You cannot compare Darren Wilson’s response to a lay person’s response.”

“What would you have wanted him to do in that video?” Cevallos asked. When Ivory repeated that he could have called an ambulance or administered aid, Cevallos said, “If he was still living.”