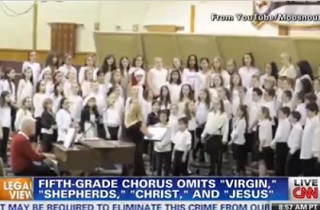 Coming soon to a War on Christmas™ segment near you: the story of a 5th grade choir that sang a version of “Silent Night” which did not include Jesus-specific references like “‘Round yon virgin, mother and child” and “Holy infant so tender and mild.”

On Friday afternoon’s Legal View, CNN’s Ashleigh Banfield reported on the outrage the song generated, and gamed out the legal ramifications, but was the song really “eviscerated”?

Banfield introduced the segment by correctly noting that the children of Ralph J. Osgood Intermediate School sounded “awesome” when they sang the song, but asked viewers to “listen carefully and then tell me if you notice anyone or anything missing.”

She played a clip of the performance, featuring the lyrics “Silent night / Holy night / All is calm, all is bright / Glory streams from heaven afar / Heavenly, hosts sings Hallelujah / Sleep in heavenly peace.”

“Did you catch it?” Banfield asked. “No virgin mother, no child, no holy infant, no tender and mild, and definitely no Christ the savior or lord at thy birth. None of that. No way, because the school didn’t want to offend non-Christians by singing a Christian song. So they just left that whole Christian part out.”

She then convened a legal panel, which concluded that there could be an argument made that the changes constituted “hostility” toward Christianity by targeting those lyrics:

Granted, the logic behind this decision is dubious, at best. Taking out references to Christ the savior, but leaving in the heavenly host singing Hallelujah is like censoring a pron clip by blurring one nipple and half a testicle. If they didn’t want to offend non-Christians, the school might have gone with the more obscure, somewhat grim Weird Al Yankovic food-related parody “Soylent Night.”

But that also undercuts the silly “hostility” argument, because it’s still an overtly religious song, with references to beliefs that run counter to many non-Christian religions, and to atheists. Also not explained in any of the stories about this incident is the fact that these kids are singing the actual lyrics to the song; they’ve simply combined two of the verses. If singing the actual words to an overtly Christian song constitutes hostility to religion, then I don’t know where that leaves my high school choir. We sang it in that most melodious of languages: German.