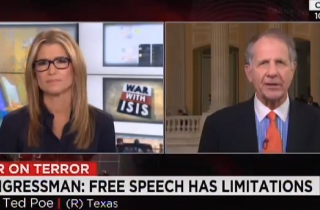 Republican Rep. Ted Poe (R-TX) thinks social media sites have an obligation to further crack down on ISIS propaganda. When asked by a CNN host if his criticism extends to media outlets like Fox News — who published video of ISIS forces burning alive a captured Jordanian pilot — he wavered just a bit in his staunchness.

Despite that hardline stance on the materials, CNN anchor Carol Costello led the lawmaker into a trap of self-contradiction by getting him to agree that ISIS execution videos should “absolutely” be banned from websites like YouTube.

“I just wondered if you would extend your concerns to the media in general and showing these videos at all on-air or on their websites,” she asked, hinting at Fox News’ infamous decision to publish the entire video of Muath al-Kasaesbeh‘s death on its website.

“These private companies have the obligation to follow federal law,” Poe responded. “They should not be aiding [ISIS] in any way.

Costello pressed even further, this time directly referring to Fox’s decision. Poe responded with what can only be described as a wishy-washy answer: “I don’t know if that should have happened or not. We can make the argument that, yes, that is aiding ISIS — maybe, maybe not, I don’t know on that specific one. I didn’t see it so I can’t answer that question.”

The anchor’s follow-up: “But you would object to that being put on Twitter or on Facebook, right?”

And Poe’s response: “In the — I would object to any type of Twitter, or any type of tweet that would promote a foreign terrorist organization, no matter who it is.”

“Including links to those videos, right?” Costello asked. He confirmed. And she ended the interview on that note.