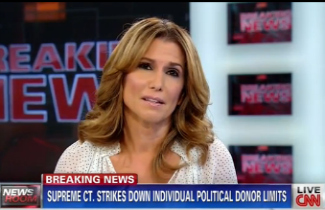 After the Supreme Court ruled today to strike down aggregate limits on an individual’s federal campaign contributions, CNN anchor Carol Costello lamented that now “money is people too.”

Legal analyst Jeffrey Toobin joined Costello on-air to explain for viewers the Wednesday ruling. This case expands the previous ruling from 2010’s Citizens United v. FEC to now say that, in his words, “individuals have a First Amendment right to give as many different political campaigns as they want the maximum amount of money. There used to be an overall limit of how much money you could give to individuals, to individual campaigns. Now, there are limits you can give to one campaign, but you can give to as many campaigns as you like.”

“Doesn’t that give wealthy donors a big advantage?” Costello inquired.

“Yeah, that’s exactly right,” Toobin answered. “That’s why wealthy donors were behind this case. What the Supreme Court has said is that the First Amendment protects the right to give campaign contributions as a form of speech.”

“These rulings continue to surprise me,” the anchor said. “Only because so many Americans are concerned about the money factor with who gets elected to public office. They think it is a real problem. These kind of rulings seem to only exacerbate those problems.”

Toobin responded that the court seems to be saying that “we give freedom of speech to people that engage in hateful speech, and so we have to give freedom of speech to people who want to give to political campaigns.” On the other hand, he noted, the dissenting justices basically said “that is all a bunch of nonsense” and that “speech is not money.” But they were defeated by a 5-to-4 margin.

“Now we know corporations are people and money is people too,” Costello reacted.

“Money is speech,” Toobin corrected. “Corporations are people under Citizens United. The heart of today’s opinion is that giving money to a candidate is like speech. A lot of people disagree with it. That’s the law of the land.”