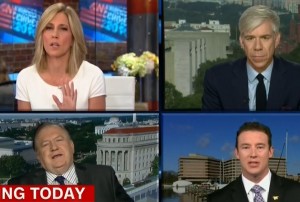 As the Senate prepares to vote on several gun control measures in the wake of the Orlando mass shooting, the debate continues to rage in the media as well. On CNN’s New Day Monday morning, Donald Trump supporter and CNN contributor Carl Higbie trotted out a few familiar pro-gun talking points, but was repeatedly smacked down by anchor Alisyn Camerota, who was having none of it. Higbie first echoed Trump’s insistence that an armed presence at the Pulse nightclub would have prevented the tragedy, but Camerota pointed out that there was an armed security guard, and that police responded within minutes.

Higbie then trotted out what he described as a “Harvard study” that he said proves there’s “absolutely no evidence to the fact that gun laws will prevent gun violence,” to which Camerota had a quick response:

Camerota: hold on one second. tell that to australia. australia passed a massive gun control law in 1996 after a mass shooting. They bought back hundreds of thousands of semi automatic weapons and haven’t had a mass shooting since.

Higbie: And their violent crime rate has since risen.

Camerota’s quick and effective response notwithstanding, what she didn’t tell her audience is that the 2007 “Harvard study” Higbie referred to wasn’t actually a study, and wasn’t produced by Harvard researchers. It was a non-peer-reviewed paper written by NRA-backed gun rights activists that was published in the conservative student-edited Harvard Journal of Law & Public Policy, and which was refuted by an actual Harvard researcher. From Snopes:

In short, the purported 2007 Harvard “study” with “astonishing” findings was in fact a polemic paper penned by two well-known gun rights activists. Its findings were neither peer-reviewed nor subject to academic scrutiny of any sort prior to its appearance, and the publication that carried it was a self-identified ideology-based editorial outlet edited by Harvard students.

Camerota responded to Higbie using common sense, but when that fails, you can always try facts.