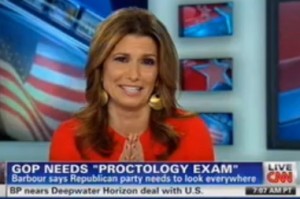 Whether through true insight or base survival instinct, a handful of Republicans have recently engaged in some admirable introspection regarding their resounding Election Night defeat. While the Romney/Ryan ticket has individually popped up to blame the whole thing on dark people and their young accomplices, people like William Kristol and Gov. Bobby Jindal have begun to see the light. At the Republican Governors Association conference in Las Vegas Wednesday, former Mississippi Gov. Haley Barbour encouraged the trend, saying the party needed to “give our political organizational activity a very serious… proctology exam.”

On Thursday morning’s CNN Newsroom, anchor Carol Costello offered her own translation of Barbour’s advice for the GOP:

All kidding aside, the new vogue of Republican self-scrutiny is nearly as perilous as the ditch they’re trying to dig out of. The Daily Caller‘s Matt Lewis sketched out the broad strokes of the party’s needed evolution shortly after the election, calling for “modernization, not moderation,” a mantra that has since been taken up by heavy hitters in the party. It’s an attractive notion that, superficially, says that Republicans can remain “pure” by adding a fresh coat of paint and a kick-ass stereo, but Lewis isn’t just talking about adding a racing stripe here and there. Republicans already tried to buff away their problems with women and minorities this election with a carnival of Mick Jagger-worthy lip service at the Republican National Convention, and it didn’t work.

Republicans have to modernize their policies, too, and retire obsolete models like nativism, which is where the first cracks appeared. There has never been anything “conservative” about the Republican Party’s insistence on coddling xenophobes by opposing what would be enormously pro-business policies on immigration. That’s modernization. On the question of “life,” most of the “cosmopolitan conservatives” Lewis wants to reach would agree that it makes no sense to oppose abortion and restrict access to birth control. Modernization.

Step a few feet away from the Lila Rose booth at any CPAC convention, and you’ll encounter nearly unanimous support for legalizing marijuana, and for leaving gay people the hell alone. There is a huge groundswell of stealth support for a more modern conservative movement that, until now, has gotten shrieked down by the backward, but loud, minority.

They will probably be shrieked down this time, as well. Ask Matt Lewis what kind of mail he gets any time he espouses any kind of policy that’s more current than a blunderbuss. When the dust settles, Republicans will decide that the best way to deal with their problems is to learn a few phrases of Spanish, send their wives out onstage to shout “I love WO-MEEEEEN,” and bark out the occasional stanza of “Who Let The Dogs Out?”

Good luck with that.