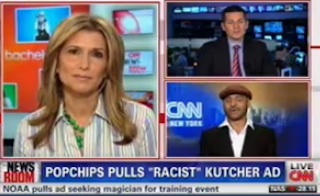 Kapur said he was particularly bothered by the constant pigeonholing of Indians in stereotypical roles.

“There are a lot of jokes about us, and they always are stereotypical,” said Kapur. “I always get, like, for example, even in auditions, I always get called for the 7-eleven worker or the cab driver and that’s about it. I mean, I could be a cheerleader. People don’t think of that. And I would be great at that. But, you know, I think it’s… people need to be a little more sensitive. I mean it is a joke. I don’t think it was intended to be racist…”

“You’re talking about the Ashton Kutcher ad now, because a lot of people thought it was because he had ‘brownface,'” Costello observed. “I mean, was that the thing that took it over the line?”

“But not with their faces painted brown,” Costello added.

Obeidallah thought that while Kutcher wasn’t going out of his way to be racist, he should have thought about whether he was taking things over the line.

“Can you imagine if he put blackface on and played a black man as a buffoon?” he asked. “Of course it’d be outrage. Or an Asian guy with big buck teeth and doing those old, clichéd Asian accents?”

Costello followed up by asking whether we were becoming “too sensitive” as a society. Kapur said that, yes, we are, but that Kutcher’s portrayal was particularly lowbrow and, as it turns out, inaccurate. “Bollywood producers,” he added, “look like Harvey Weinstein, ok?”

Popchips told CNN’s Rachel Wells that Kutcher’s controversial Raj character had been “removed from planned billboards that will launch on May 7, and has also been removed from its video commercial on the company’s Facebook page and YouTube channel.”

Watch the discussion below via CNN: