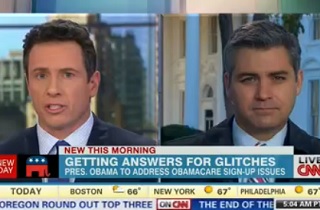 The failed Republican effort to defund Obamacare via government shutdown/default has been attended by a wealth of absurd media coverage, but CNN’s New Day set a new bar for meta-absurdity Monday morning. In reporting dreadful numbers for Republicans in its own poll, CNN has also been reporting that President Obama‘s planned speech on Obamacare this morning might just even things out.

The new CNN/ORC poll is just the most recent in a slew of public opinion surveys that show Republicans taking a huge political hit in the wake of the government shutdown, but the mainstream media’s lust for a “both sides” narrative makes it impossible for CNN to just leave it at that. What’s absurd, though, is the way New Day‘s Chris Cuomo and Kate Bolduan tied the Republicans’ terrible poll news with President Obama‘s speech later this morning.

First, during one typical New Day top-of-the-hour news tease, Cuomo reported that “the American people think Republican control of the House is a bad thing, but could the President’s admission, later today, about Obamacare’s mistakes mean the beginning of a comeback?”

It’s no secret that the rollout of the Obamacare website has been an epic fustercluck, but that has been true for three weeks, and has not been a secret, so why would that not already be reflected in CNN’s poll, and why would that change today? Put a pin in that for a moment.

Moments later, co-anchor Kate Bolduan teased the poll numbers again, then predicted “But that news may be blunted by the President as he prepares to address Obamacare today, and all of the problems that have plagued the system’s launch.”

That’s a bold one from Bolduan, isn’t it? How could a CNN anchor possibly know how something might affect the way the CNN might cover CNN’s poll? It’s like a backscatter x-ray of mainstream media narrative-building, and nobody looks good in one of those.

Beyond that, though, Boduan and Cuomo effectively diagnose the shiny-object syndrome that plagues the current political news media (Obamacare doesn’t cover that), because they are basically admitting that without a government shutdown to bat around with their paws, the media is free to chase the laser pointer that is the Obamacare website.

CNN has been promoting this narrative all morning, reporting that President Obama is going to “speak extensively” about the glitches that have plagued the Healthcare.gov launch, and while the President will surely touch on that during the speech, here’s how the White House describes the address, scheduled for 11:25 am:

Later in the morning, the President will deliver remarks in the Rose Garden on the Affordable Care Act. The President will be joined by consumers, small business owners, and pharmacists who have either benefitted from the health care law already or are helping consumers learn about what the law means for them and how they can get covered. The group will include individuals who have already applied for and enrolled in quality, affordable coverage through the Marketplaces and those who are planning to after exploring and comparing their new health care options.

What CNN seems to be telegraphing is that they plan to ignore the bulk of that speech, and focus exclusively on the glitches. What are the odds that focus will include more assertions that the President and Republicans are now in a tie for everything? Stay tuned!