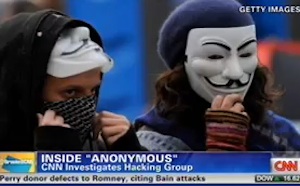 During CNN Newsroom with Brooke Baldwin, reporter Amber Lyon from the network’s Special Investigations unit took an undercover look at the secretive group, Anonymous, which has dominated the news for the past few years including recent involvement with the Occupy movement. What they discovered might surprise viewers.

Lyon spoke with one of the group’s members, who went by the codename “Troy”.

“There’s no specific person that talks for us,” Troy divulged to Lyon. “It’s more like a hive. An idea is brought up and whoever agrees with it, if the overwhelming majority of people agree with it, then we go with it.”

“Anonymous likens itself to the Air Force of the Occupy movement,” Lyon explains. “When they see evidence of what they believe is police misbehavior, Anonymous strikes back, releasing personal information about specific officers.”

Lyon revealed that the Department of Homeland Security has put out several alerts to law enforcement and corporate security focused mainly on the group’s hacking activities and the FBI has made more than a dozen arrests. “But there’s no indication that has cramped Anonymous’ style,” she says.

Baldwin asked Lyon if the group had any clear demands.

“They don’t really have an agenda necessarily as a collective. But some of the individual ‘anons’ we spoke to say their main goal is to keep people talking about it, to keep it relevant and to protect the human rights of the protesters. You saw in that video they’ve been releasing information, personal information for police officers they believe violated those rights and if you look at the more extreme side to Anonymous, Brooke, some of those “anons” are calling for a full-out revolution here in the United States similar to the ones you’re seeing over in the Middle East and North Africa.”