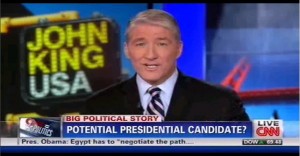 CNN’s John King. Is he a CNN superstar, or the next Kathleen Parker?

That two major newspapers both ran with a “King’s On the Outs” story might suggest an imminent departure. That is, were those two papers not owned by the same owner, News Corp.–which also happens to own the Fox News Channel, a CNN competitor.

On Monday, The Wall Street Journal, citing anonymous sources, reported that “according to people familiar with the situation, CNN is looking closely at its 7 p.m. hour, which features a political program hosted by John King. The network also continues to express interest in “CBS Evening News” anchor Katie Couric, whose deal with CBS Corp. expires near the start of June.”

A day later, the WSJ‘s corporate cousin the New York Post (both papers, like the Fox News Channel, are owned by Rupert Murdoch‘s News Corp.) also put King in the crosshairs of termination in a PAGE SIX item ominously headlined “More Blood,” which suggested that “John King is the next head likely to roll at CNN.”

The Post tied a recently-taped pilot featuring CNN’s Soledad O’Brien was a potential replacement program for King’s John King, USA. The Post described JK USA as “low rated,” though recent Nielsen overnights have been very impressive for the 7 p.m. show (up 20 percent among viewers 25-54 compared to a year ago). And in a media release from CNN today, the network crows about King’s ratings performance in February, noting that was the show’s best month since its launch in March 2010.

So, as Heidi Klum might ask, is he in… or out? All CNN would tell us is this, via a press rep: “We don’t comment on rumors, and JK, USA just had its best month since launch.”