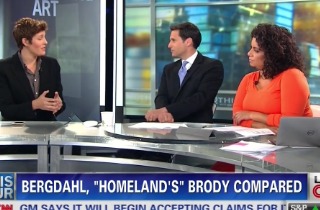 You know how people have been saying on the internet how much this Bowe Bergdahl thing is like Brody on Homeland? That’s what’s known as a joke. Of course there are some similarities, but it’s silly to seriously talk about how much the story of a real-world POW is like what happened on a TV show, right?

Now, in fairness, CNN’s not the only network that’s done it this week. MSNBC’s The Cycle also brought up the comparison. But last night, CNN’s Don Lemon actually brought on the executive producer of Homeland to weigh in. Gideon Raff said it’a fascinating comparison, with the same question facing both Nicholas Brody and Bergdahl: were they turned?

Raff, at least, provided some perspective from his background and personal research about what it’s like when prisoners of war return home. But this morning, John Berman and Michaela Pereira held a discussion that was more geared towards just observing the similarities. At the outset, Berman admitted he’s uncomfortable making the comparison, but at the same time, “a lot of people are talking about this.”

Sally Kohn took note of the interesting parallels and said of Bergdahl, “Hopefully he wasn’t watching Homeland and modeling his story after that because it doesn’t end well for Nicholas Brody.”

Berman concluded by remarking upon the “deeply serious lessons from a television show,” and you can watch that segment below, via CNN: